A trip to Cambridge can be a wonderful experience for both locals and tourists alike. The Cambridge Day trip is a treasure trove of historical sites, beautiful streets, and historic buildings. With the best transport links from central London, you can try punting along the River Cam across the world-famous Cambridge University Colleges in less than an hour. Among all the tourist attractions in Cambridge, Punting in Cambridge is one of the most popular pastimes of the medieval and present era.

A Brief History of Cambridge

Although Cambridge has been a major trading center since Roman times, the city gained prominence in the Middle Ages when the famous university was founded. The University of Cambridge, one of the most famous centers of learning in the world, was founded in 1209. Some scholars at Oxford University fled after a dispute with the city residents. The University and its beautiful college buildings are now the heart of the city. It is a place where scholars cycle through the streets, relax by the river and spend some quality time with their families.

Cambridge is a small city and easy to get around. You have to walk half an hour to get to town by train. Let’s get acquainted with the major tourist attractions in Cambridge.

Start your Cambridge sightseeing by climbing the 123 steps of the tower at the 800-year-old Great St. Mary’s Church opposite King’s College. The view above King’s College Chapel is the best in Cambridge, extending across the colleges and the Cam River.

Great St. Mary’s Church is a parish and university church built in the 15th century. It has an excellent interior and was added to the galleries in 1739. The church, which was founded in 1608, is famous for its views of Cambridge.

Many people visit Cambridge to see this extraordinary building – King’s College Chapel. When you walk into a large space, you can’t help but be amazed at the world’s largest gothic styled fan vault ceiling.

The light that refracts from the medieval stained glass windows creates an incredibly beautiful light inside the chapel. The chapel is open to the public at different times throughout the year. 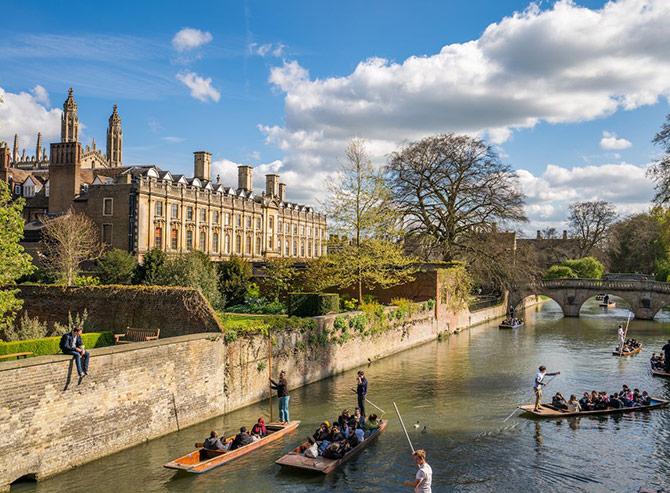 Punting tours in Cambridge also allows you to discover the glorious stories of medieval England narrated by your punting guide. A highlight of your punting experience will include the Bridge of Sighs and the Mathematical Bridge, which are the most famous bridges in the city. A cozy ride is guaranteed during the winters as blankets are available during these punts.

Most of us have heard a lot about Cambridge University colleges that are famous tourist attractions in Cambridge. Cambridge punting tours across many of the city’s most famous colleges. The 31 colleges of the University of Cambridge are founded in their 800-year old history, each with its unique history, architecture, and story.

Here are some of the most famous Cambridge colleges,

One of the oldest and most famous colleges in Cambridge, St. John’s was founded in 1509 by Lady Margaret Beaufort, mother of Henry VII. Her emblem appears at the main entrance of the college. The buildings are named after the bridge of the same name in Venice. St. John’s College Chapel was designed by Sir George Gilbert Scott and is thought to have been inspired by St. Chapel in Paris.

Trinity College is a renowned learning centre of Cambridge University and is famous for its Great Court, the Ren Library, and distinguished alumni. No less than 32 Nobel laureates attended Trinity as graduates. Prince William Gloucester and Prince Charles were also students of Trinity. Wren Library is one of the best libraries in the world with a rich collection of rare books in the country and is home to the first two folios of Shakespeare.

Henry VI established this prestigious institution in the year 1441 near the River Cam. And the entire building faces onto the famed street known as the Kings Parade. You should visit Kings College to explore the spectacular Gothic-styled architecture and the gorgeous stained glass windows. This famed academic building is home to the dynamic Baroque paintings of Peter Paul Reubens that dates back to the 1616’s.

The Mathematical Bridge, part of the Queen’s College buildings, is the final destination of most of the Punting Tours in Cambridge. It is wrongly attributed as the work of Isaac Newton, but was built after his death. It is one of the most popular landmarks of the city. Queen’s College is one of the oldest colleges in Cambridge, and the Dutch Renaissance scholar Erasmus is an alumni.

With a massive 40-acre Botanical garden founded in 1831, this park houses a collection of over 8,000 species of plants from around the world. Be sure to spend your time wandering through the glasshouses and sidewalks in the garden, which can be done as part of a guided tour. Afterward, visit the Garden Cafe and the Botanic Garden Shop.

Other Famous Places to Visit in Cambridge

Cambridge is a city steeped in rich history and deep secrets hidden behind every wall. This is a place that needs to be explored with the guidance of experts, so you can fully understand the legacy and its impact on history.

Cambridge punting tour offers tourists the opportunity to explore the 800-year-old historic universities under the guidance of experienced guides.

Stroll along the backs

Your Cambridge tour will not be complete without crossing the River Cam in an area known as “the Backs.” This beautiful place is home to some of the most beautiful colleges in the city, from Magdalene Bridge to Silver Street Bridge. On sunny days it is an excellent tourist attractions in Cambridge for people who love duck watching. You can walk along the path in any weather.

An important landmark in Cambridge is the Church of the Holy Sepulcher (also known as The Round Church), one of the few surviving medieval round churches in England.

If you can spare a little more time, a visit to the Fitzwilliam Museum is a must. This museum is full of antiquities from ancient times and also includes the artwork of many prolific painters of Europe. There are paintings by Da Vinci, paintings by Rembrandt, and a fascinating collection of ancient Egyptian artifacts.

Since 1174, Newmarket, which is located 13 miles east of Cambridge, has been the center of English horse racing. Horse lovers can visit the National Horse Racing Museum at this gorgeous High Street. Exhibits are associated with the history of the “sport of kings” and are still among the most popular sports in Britain.

All the 31 colleges of the University fill the entire expanse of Cambridge. A cultural adventure in Cambridge that combines riverside strolling and lunch in a proper English pub highlights any trip to England. Most of the places we mentioned here are brimming with beautiful ecosystems and the incredible history of Cambridge. These tourist attractions in Cambridge would be suitable locations for anyone who desires to explore the spectacular destinations of London.